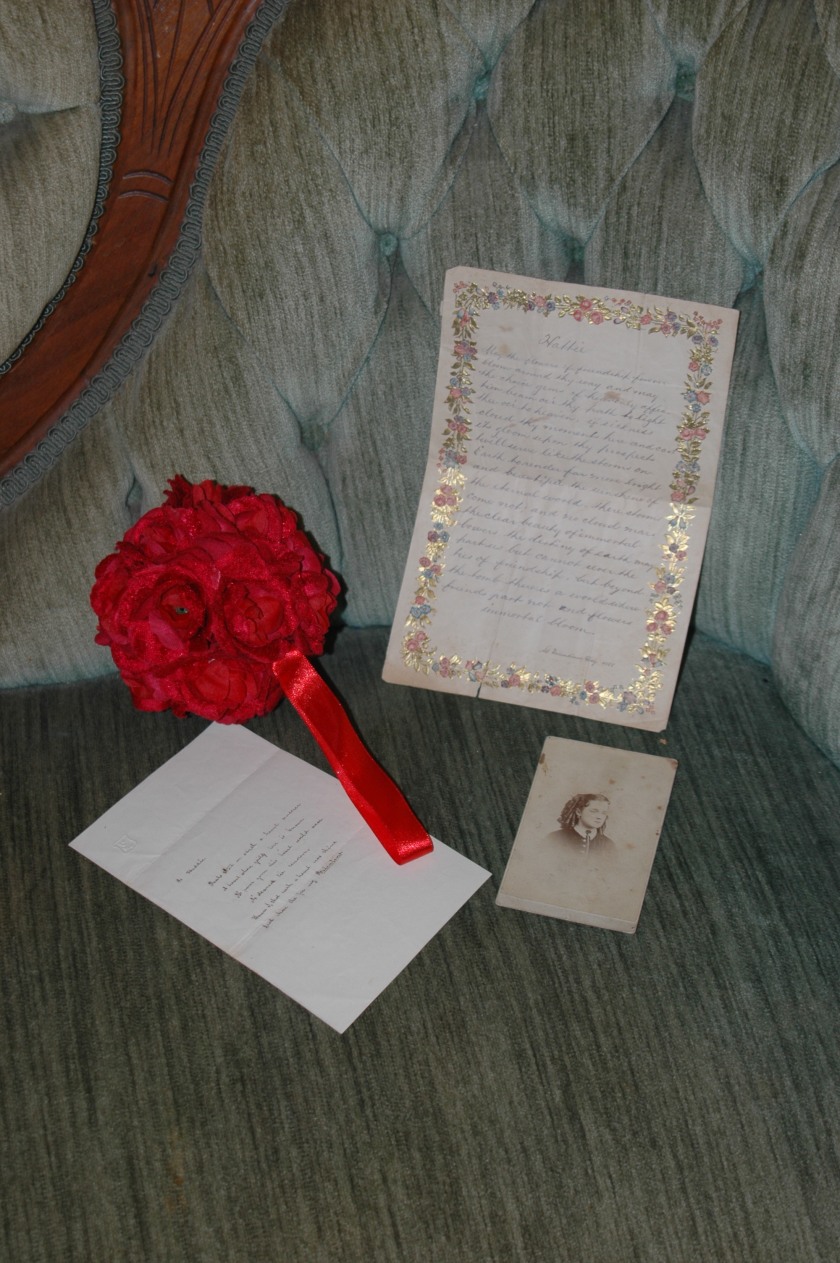 Special to the Star and Wave

In Victorian times, handwritten love notes on Valentine’s Day were the way to reveal romantic feelings for someone. In the modern age, “swiping right” with your thumb on a smart phone dating app is a way to signify interest in someone and potentially connect with a future love.

Located in Cape May Court House, the Museum of Cape May County is home to hundreds of years’ worth of local records and artifacts. Established in 1927, the Museum preserves and protects the history of the Jersey Cape for historians and visitors alike.

Valentine’s Day cards sent in the Victorian era are remarkably different from the current cards one can find at a Hallmark store. Valentine’s Day is the second-most-popular holiday for greeting cards behind Christmas.

In fact, Victorian valentines were not mailed, but hand delivered, according to museum volunteer Barbara Novsak.

“Historically, the old way valentines were sent were on handwritten on letter paper and then hand delivered,” Novsak said. “The letters had embossed envelopes with embellishments on the cards. They had pockets to put jewelry, candy and candy jewelry. Even secret notes.”

Novsak said some of the valentines were so embellished and large, they had to be put in a presentation box.

“When sending valentines first started, it was just on notepaper,” Novsak said. “The Valentine’s Day market first started in America because a young girl in Massachusetts received a valentine from a man in England.”

That young girl was Esther Howland of Worcester, Mass. The Howland family came over to America on the Mayflower. Her father owned a stationery and bookstore. She graduated from Mount Holyoke Female Seminary in 1847. The card she received was made with fabric and lace, with dimensional layers.

Esther “started manufacturing them and then enlisted college friends to write them,” Novsak said. “She sold them at her father’s stationery store. Worcester became the valentines center of America.”

Howland’s creation of valentine cards came during the height of the Industrial Revolution.

“It was a time where they could make paper better and faster and they had machinery for everything,” Novsak said. “Even the embellishments.”

The Museum has a collection of Victorian valentine cards, including one from a Cape May County woman, Hattie Hughes.

The year was 1868. At age sixteen, Hughes received a valentine from an admirer, Frank Hoffman. The valentine letter from Hoffman to Hughes is carefully preserved in wrappings at the museum. 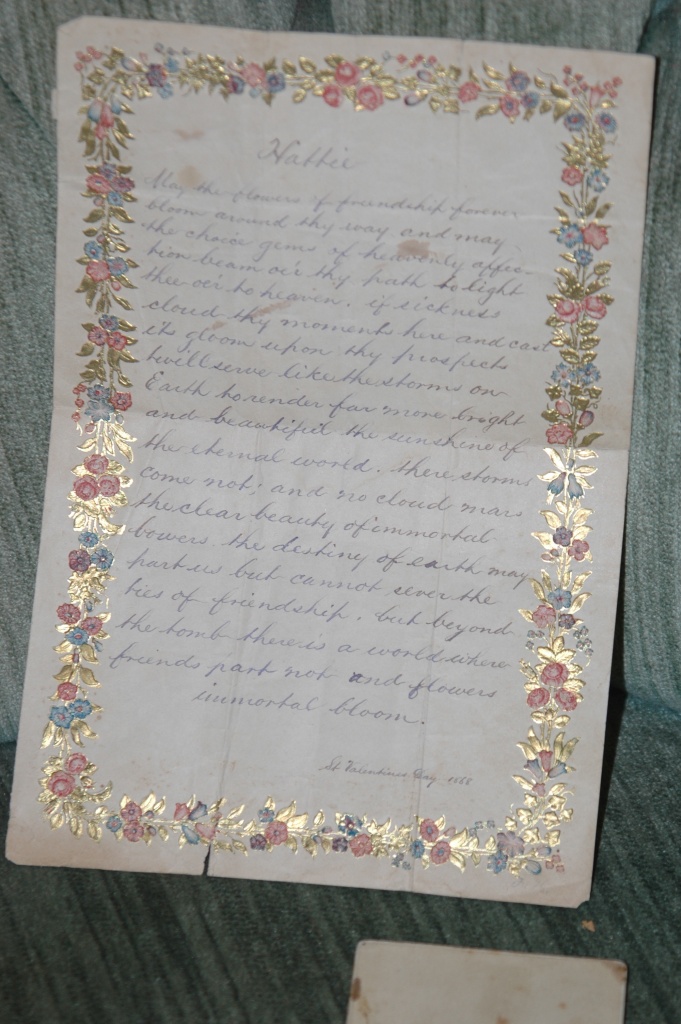 The valentine reads: “Hattie – may the flowers of friendship forever bloom around thy way and may the choice gems of heavenly affection beam o’er thy path to light thee o’er to heaven, if sickness could cloud thy moment here and cast its gloom upon the prospects, he will serve like the storms on Earth to render far more bright and beautiful the sunshine of the eternal world. There storms come not; and no cloud mars the clear beauty of immortal bowers. The destiny of Earth may hurt us but cannot sever the lies of friendship – but beyond the tomb there is a world were friends part not and flowers immortal bloom.”

In addition to his valentine, Hughes received other love notes from Hoffman. Hoffman’s words did not sway Hughes, for she married Michael Lengert of Philadelphia in April 1871.

Novsak did research on the history of the origins of Valentine’s Day, which started because of Paganism in Rome.

“Christian belief changed the celebration, with Emperor Claudius II having problems with his empire during the third century A.D.,” Novsak said. “It started to fracture, so he needed soldiers to keep hoards from coming in and he wanted young, single men to fight. He thought they fought better than married men.”

According to Novsak’s research, it was a time when Catholics were converting to Christianity, priests were becoming bishops, who were, in turn, going around and marrying people to encourage them to stay faithful.

“That didn’t sit well with the emperor, so he arrested a bishop named Valentinus and put him in jail,” Novsak said. “The bishop became friend with his jailer and the story has it that the judge who was going to execute him had a blind daughter. Valentinius prayed for her and her vision got better and her father converted to Christianity.”

Novsak said Emperor Claudius was so mad, he had Valentinius beat, stoned and beheaded.

“The trifecta of death,” Novsak said. “That is where Saint Valentine comes from because he didn’t recant or stop marrying people. He stuck to his religion in the way he believed, which cost him his life but made him a Saint.”

“Before Valentinius was killed, he wrote a message to the girl he had healed and at the end of his message he wrote, ‘from your Valentine,’” Novsak said.

“It piqued my interest because I hadn’t heard of it,” Novsak said. “In the 1840s, you printed valentines on postcards and put them in mailboxes anonymously. They were valentine cards that insulted the person you sent it to.”

Novsak explained that the postal service was dependable and price controlled at the time, so for a penny, senders could mail the card without paying, but the receiver had to pay.

“So not only did they insult you, but you had to pay to get insulted,” Novsak said.

Novsak said there were valentine cards being produced during the first World War.

“The war made things scarce and harder to do and get it across seas,” she said. “But when the soldiers came home, there was an uptick in nicer valentines and has continued to grow continuously into the second largest card industry today.”

The staff of the museum said they could not do without Novsak as a volunteer.

Novsak, a retired nurse, said she had wanted to volunteer at the Museum for years. “I started coming up here to pull weeds and play in their gardens. But it got too hot and I ran out of weeds and came inside. One thing led to another and now I’m here five days a week.”

The Museum, located at 504 Route 9 in Cape May Court House, is home to more than 500 years of county history. It is located in the historic Cresse-Holmes House, which dates back to 1704 and 1830. In addition, the property is home to the historic Smith Barn and a carriage shed. The museum is also home to the Alexander Library, which houses centuries of Cape May County genealogical documents.