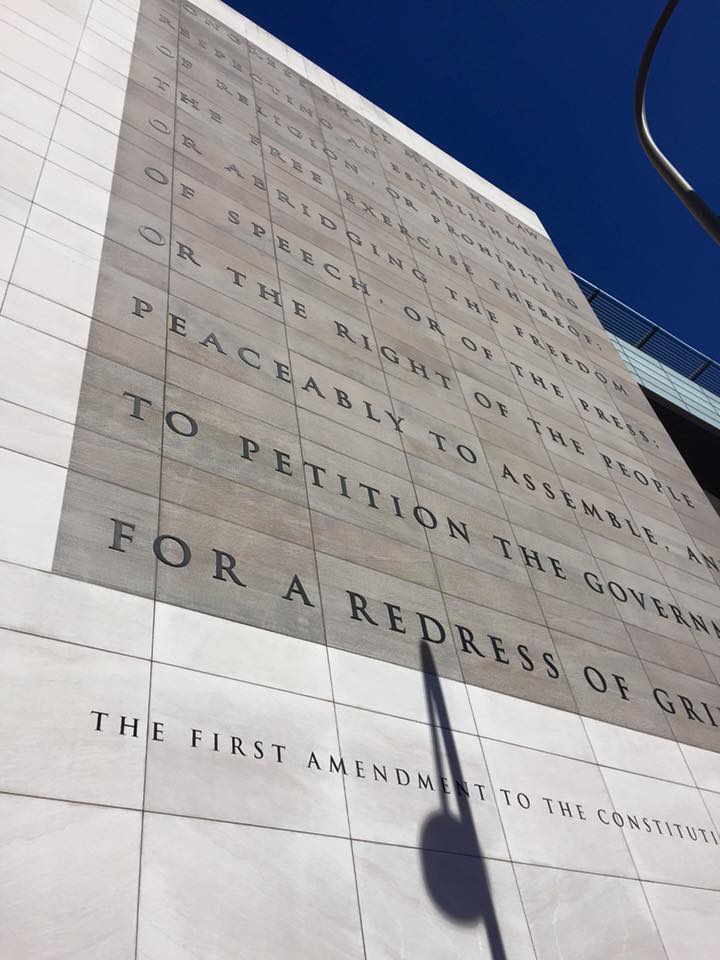 Special to the Star & Wave

It is unusual to hear of a museum closing in  Washington, D.C., but after 11 years, the privately funded Newseum has put visitors on deadline to visit before the doors are closed on Dec. 31.

The Newseum was founded to inform the public of the importance of a free press and the First Amendment. The seven-level museum is interactive and contains numerous artifacts from the history of journalism. For a writer like me, it is the most incredible museum I have ever been to and I have never been bored in my many visits.

While the Smithsonian museums are free, Newseum tickets run between $15 to $25. The upside is the ticket grants you a consecutive two-day entry to the museum. Ticket pricing is one of the reasons the Newseum has had serious financial losses.

In January, it was announced Johns Hopkins University would purchase the building for $372.5 million for their D.C.-area graduate programs. A Jan. 25 article in The Washington Post reported the Newseum would look for another location, which turned out to be a fruitless search.

My first visit to the Newseum was not to the actual exhibits, but to the gift shop. (I’m a gift shop addict and I will judge a museum based on what memento I can take home). Based on the journalism-inspired gift shop, I asked my mom to take me back to see the entire museum.

The Newseum starts before you even walk in the door, with the First Amendment façade and the popular display of “Today’s Front Pages.” The display shows a rotation of the present day’s front pages from every state and D.C. and a few international newspapers. The top floor has interactive front page displays, allowing visitors to read the front pages of multiple papers.

It is recommended when visiting, you take the top-down approach of starting on the sixth floor and working your way down. The fifth floor has limited time galleries and the ones I have seen ranged from reporting from the Vietnam War, President Abraham Lincoln’s assassination, the Washington Nationals and most recently, Rise Up: Stonewall and the LGBTQ Rights Movement. Seeing the changing exhibits is a treat – you never know what you will learn.

Every visit, my absolute must-sees in the Newseum include the door from the Watergate Hotel, which the burglars infamously taped open. The “Inside Today’s FBI” exhibit is a fascinating look into today’s current focus on the fight against terrorism in a post 9/11 world. Items in this exhibit include the actual Unabomber’s cabin and the running shoes of a Boston Globe reporter who was running the Boston Marathon then began to cover the Boston Marathon Bombing. Previously, this exhibit also featured belongings from the D.C. snipers and a Klu Klux Klan outfit.

The most powerful exhibit of the Newseum is the 9/11 gallery. This part of the Newseum has front pages from dozens of newspapers on Sept. 12, 2001. Additionally, the exhibit features video footage from the day of the attacks.

Visitors can write their memories of 9/11 to be filed away and displayed in the exhibit. There is also an antenna from the roof of the World Trade Center and a tribute to William Biggart, a photojournalist who died covering the attacks. His camera was found at ground zero and visitors can see the photos he took in his final moments.

While I was in college, I wrote a paper for my tourism class on the Newseum. I wrote about the most profound part of the 9/11 exhibit is the permanent box of tissues encased in stainless steel. The footage is intense and emotions run raw while visiting this exhibit. The last time I was there, my dad did not want to go in as he said he lived through that day (he was on his way into Arlington and could see the smoke coming from the Pentagon).

The bottom floor contains a piece of the Berlin wall. The other exhibits include a history/timeline of newspapers and magazines, memorabilia such as the suit O.J. Simpson wore at his trial, an interactive newsroom, the internet, TV and radio gallery, the Pulitzer Prize photographs gallery, the First Amendment Gallery, press freedom around the world and a journalists’ memorial, for those who died on the job.

For a young journalist like me, seeing the Newseum close is like a slap in the face. In a time where politics and so-called “fake news” run rampant, the Newseum was a place to reflect on just how integral the Freedom of the Press is to the history of the United States. In my college journalism classes, I learned how the media acts as the fourth estate, the unofficial watchdog. Who will be there to provide the history of journalism to the public, without the Newseum?